A while back I had posted some of the results and experience I had gotten moving my blog from WordPress to Squarespace. And it’s a painful process moving each individual post because it rarely comes over cleanly. While Squarespace definitely had a huge advantage from a design perspective, over time I realized what it could and couldn’t do, well. Flash-forward to October 2015 and I’ve decided now to move my blog BACK to WordPress. Given how much work any of these migrations are, why in the world did I feel compelled to take on this project?

I had done my research on web hosting platforms and Squarespace had gotten good reviews online across the board as being very mobile responsive and SEO-friendly. Even Internet luminary Rand Fishkin had pimped out Squarespace as a great web platform so in I go. At $20 a month it was significantly more expensive than a good hosting account and your elbow grease but it seemed worth it. I did my migration in February of 2015 and it was pretty painful. While I was able to pull over the text content, images and pictures were tricky and I had to re-insert them after the fact. And there were some additions I needed to make around social media sharing and rich snippets to get micro-data into my posts. That being said, I was able to get 95% of my WordPress functionality and features into Squarespace which had the additional benefit of lower maintenance and expertise needed.

But over time, I noticed the organic traffic for my blog went flat or dropped. I had expected a drop when I migrated the domain name and platform over to Squarespace but historically, my blog had increased traffic year over year for the previous three. I hoped that after a 3 month transition period, the organic traffic would pick its momentum back up and move forward as expected. Unfortunately, it never materialized even though I rebuilt all the features and tuned the blog for SEO as best I could. Can I point to any specifics that prevented my blog growth on Squarespace. Not in particular but that’s what makes SEO black magic and an art. I don’t think there are MANY people who really know EXACTLY what to do because the rules are constantly changing as is your audience (market). But in general, I do believe there are best practices and it primarily works around putting out great and relevant content.

So in October 2015 I decided to move my blog back to WordPress after 10 months on Squarespace. And my goal is to keep it on WordPress! However for my WordPress 2.0 efforts, I did have some learning points to grow from. I purchased a professional template from Studiopress and Design Palette Pro which would give me many ease of use tools for the blog. There were definitely some learning points from Squarespace that revolve around responsive design and my goal was to have the best of both worlds: a fully customizable blog platform with a great-looking, well-designed blog framework that was relatively easy to use and maintain, phew! 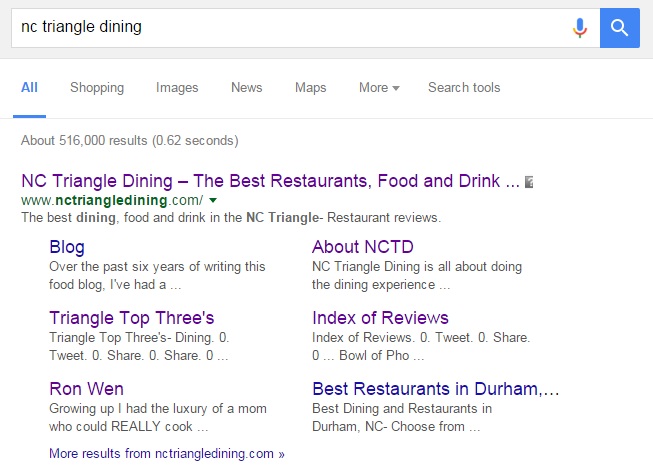 But I am so glad to be back on WordPress! The migration process is still going on a year later and while it’s been painful, the future looks so much brighter on WordPress. I’ll be covering Squarespace to WordPress migration challenges and hurdles in a future post. But now that I’m back on WordPress, Google seems to better understand my website (see above SERP results) and I’ve added in some great features through the extensive WordPress plug-in library. Here’s to more and better moving forward!